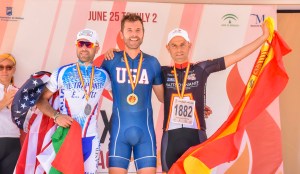 Recently our title sponsor founder and head coach, Nate Dunn, sat down to discuss his second attempt at winning the World Transplant Games Time Trial and Road Race.   While Nate wrote a wonderful post on his struggle and journey, we wanted to get some additional insight and hear first hand about his career, accomplishments and what’s next.

Nate is a recipient of a liver transplant and recently became a two time world champion at the transplant games in Spain while defending his title two years prior in Argentina. We have a lively discussion of his love for cycling, coaching and what being a transplant recipient is all about.  Give us a listen, review and comment on iTunes, Stitcher, Overcast.fm, Podbean and Google Play. 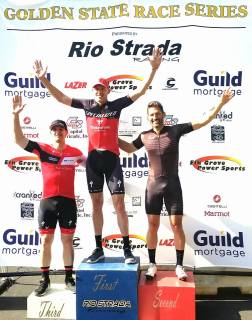 This series has always been a great local event. It’s a great venue and Rio Strada puts on a great show for all involved.   I’ve raced these courses many time and was looking forward to the fun.

Day 1 Criterium
The plan was for me to sit in and stay rested, be attentive and not miss the break should the usual suspects get up the road. I kept an eye on the top contenders and covered a few attempts that some threats in the mix. Nate Dunn, Tyler Janke, Jason Smith, Nick Caster and Chris Flower were staying active regulating the front.  A dangerous break with about 8 guys had a decent gap and I saw a bridge attempt wind up so I followed. We bridged up and had a decent gap on the field with 5 to go.  Tyler had made the move earlier so we now had two in the break of 10 or so. I’m not sure if the field turned it on or the break fizzled out, but we were are all together with 3 to go. I stayed towards the front, moving up and kept in the top 15 with 2 to go. On the last lap, I was surfing bit further back then I wanted, then along comes Tyler, gives the giddy-up tap and away we went. He brings me right to the front in good position into the 2nd to last corner. Tyler gave it everything to launch me into the last corner. As Chris Espy Jumped from the right, I was committed on the left side so I gassed it going the long way around. Espy had a pretty decent jump on the field and was hard to close with so little real-estate. We ended up 2nd for the day and proud to get on the podium rewarding the team efforts. END_OF_DOCUMENT_TOKEN_TO_BE_REPLACED

I started off April right; with a renewed commitment to training, focused miles, and lots of Pabst. The Golden State Race Series (GSRS)was coming up and I was the reigning E3 Champ (chump). I knew I wanted to win the overall again, rack up some points, and represent DDA. Jason and I had a plan, and in theory, it was a good one. Jason would usher me to the finish line, all 1800 watts of glory parting the sea of crit racers. I would then come around him for the win, sirens would sound, lightning rods would shoot from the tips of our one-fingered winner salutes. Back to reality where the race started uneventful. Standard E3 stuff, really. One guy goes, everyone chases. It’s like watching 6 year old soccer. There goes the ball, there goes all the kids. Repeat x 100. At one point I found myself off the front for half a lap and nabbed some pretty rad photos.

I decided to chill out and re-enter the pack. I heard one crash from the rear and a lap or two later, another crash. Turns out that crash was the now viral video of my old teammate Danny Mossman getting taken out by a rogue drone. I’m not saying I had anything to do with it. I’m not exactly a Tonya Harding fan, but were this women’s figure skating, Danny was Nancy Kerrigan and that drone was Shane Stant. Danny is okay, which is why I can lightly joke (heal up quick Danny!). Again, uneventful, but the green jersey competition (new to GSRS this year) did liven things up a bit on the front straight as fellow racers conjured up their inner Sagan and went for green glory. In the closing lap, I couldn’t find Jason on the back stretch so sat firm at 3rd or 4th wheel. Moves went and I surfed, staying right where I needed to be. END_OF_DOCUMENT_TOKEN_TO_BE_REPLACED

We had one goal for the race, get Nick Caster onto the podium. We decided that nothing would get away unless Nick was in it and if it stayed together I would get in position to keep it long with me moving to the front so we would hit the last two corners 1-2 to lead him out. Nick was clear that I was not to let up on my lead-out, that I needed to just stay on the gas and when I ran out of gas, he would come around me. I was worried that starting the lead-out before corner 4 would be too far for me to get him there, but was hopeful that I could pull it off. Throughout the race we tried to be aggressive, each taking turns trying to get something going off the front, but nothing developed.

There were a few times that I thought about making a move for a prime, but in the end decided not to, I wanted to make sure I stayed focused on the finish. I knew there were a number of strong riders, including several guys from Rio Strada Racing that could all make it very interesting. END_OF_DOCUMENT_TOKEN_TO_BE_REPLACED